From Alpes to Sicily new projects where functionality (and aesthetics) counts

Terna's concern for the environment and sustainability is nothing new.  Its global leadership for  performance recognized by the FTSE4Good index, the Italian company manages its business with an eye on technological development, increased quality of services and respect for the environment.

This work is carried out by dedicating resources to the research and design of green solutions for the distribution of electricity on the high a high-voltage network throughout Italy. These days Terna technicians are at work in Val Camonica, in the Alps in northern Italy,  where they scrapped 350 masts and an 82 kilometer underground network, at a cost of 110 million euros.  It’s a nice feat considering  some of the work was done at an altitude of 1800 meters, as well as unforeseen challenges, such as the discovery of an archaeological site.

And where the network cannot be buried, Terna thinks of aesthetics:

- The single-pole pylons, which represent an important innovation in the implementation of high-voltage lines. These supports are characterized by the minimization of the footprint at the base (the area of ​​land occupied by the lines is reduced by five times, from 250 to 50 square meters), the lower visual impact, and the ability to reduce the environmental impact of new lines in areas of particular scenic interest;

- Trellises Germoglio, winners of  "Pylons of the future" competition, launched by Terna in 2007 to seek new planning solutions for pylons capable of altering the visual perception.Designed by the architect Hugh Dutton (parent architect Giorgio Rosental), this steel lattice transmission tower - in use since 2013 -  runs between Piedmont and Lombardy.

- The Foster transmission tower, designed by architect Sir Norman Foster, won the international competition "Support for the environment", promoted by Terna in 1999, which marked the transition from a technical design to one more integrated into landscape. Ten Foster pylons were used in a section of the powerlines in Italy’s Florence province. The section is considered unique in the world.

But Terna has also been occupying itself with the sea. The Pantelleria Island “Smart” project  will allow the island - 100 kilometers southwest of Sicily -  to carry solar and energy storage systems, with a more efficient management of resources. The town is not connected to the national grid and was in need of a plan. To meet island demand, Terna has used submarine cables, already making connections with Greece, Sardinia-Corsica (SACOI), Sardinia-Italian Peninsula (Sapei) and Sorgente-Rizziconi (Calabria / Sicily / Italian Peninsula). Specialized divers are now ready to put down the work to Montenegro, and are studying possible solutions for Tunisia.  Terna’s work has proved to be an important investment in Italy and throughout the Mediterranean region.

Terna's activities are always oriented toward innovation and development of new technological solutions, with the aim of increasing the quality and reliability of services, with special attention given to environmental impact. This focus has allowed the company to be an Italian Industry Electric Utilities Industry Leader in the Dow Jones Sustainability Index 2015, an industrial reality that is part of the world CDP, making a concrete reality out of important values ​​of the Group's mission. CDP owns a 29.8% stake of Terna through CDP Reti. 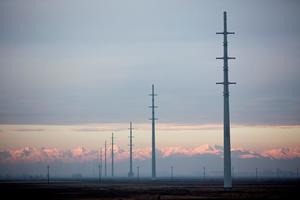