Social housing in Ferrara: with CDP

Social housing in Ferrara: with CDP

The old Palaspecchi was transformed into the Corti di Medoro in just 18 months, creating modern accommodation for University of Ferrara students.

Theambitious project, developed with FIA ​​resources (50% funded by Cassa depositi e prestiti) and funds from the Municipality of Ferrara, opened the new apartments to the public during the inauguration.

The inauguration of the student dormitory is only the first goal. One hundred and ninety-nine social housing units designed for families, young couples, and the elderly are being built in the Corti di Medoro complex, which will also have numerous spaces for the new community, such as shops, recreation areas and green areas.

After years of neglect, the area where the old Palaspecchi stood has been returned to the community. Designed in 1985, the Palazzo degli Specchi was intended to house apartments, offices and public services, but its failure to thrive made it a problematic urban area leading to to the regeneration plan with the support of the CDP Group. 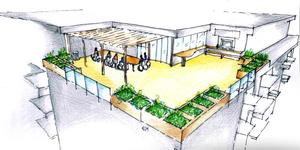