Cassa depositi e prestiti (CDP) confirms its commitment to the people of Central Italy affected by the earthquake of 2016 thanks to a new agreement in collaboration with the European Investment Bank (EIB), in coordination with the Italian Ministry of the Economy and Finance, and the Commissioner for Reconstruction.

CDP Chief Executive Officer Fabio Gallia and EIB Vice-President Dario Scannapieco have signed a €1 billion-euro loan agreement that will support the €4 billion-euro plafond provided by CDP since November of last year, to help families and businesses in areas of Central Italy affected by the earthquake. The signing of the agreement took place at the Ministry of Economy and Finance (MEF), in the presence of Finance Minister Pier Carlo Padoan and  Italy’s Special Commissioner for the Government for the 2016 Earthquake Reconstruction, Vasco Errani. The funds will cover the costs for recovering and securing damaged housing and manufacturing facilities.

To support the territories affected by the 2016 earthquake , CDP has immediately put in place initiatives, as underlined by CEO Gallia: "With the agreement signed today, CDP strengthens its commitment to helping families, businesses and local authorities affected by the earthquake. In fact, we have allocated more than €4.5 billion to rebuild damaged buildings and provide greater financial flexibility to entities and businesses, allowing the repayment of payments and taxes. All this has been possible thanks to our collaboration with the MEF and the EIB, which has enabled us to leverage both national and European resources. "

Since 2009, over €20 billion have been mobilized by CDP for populations and territories affected by seismic events and other natural disasters, with a set of tools targeted at families, businesses and local authorities. These interventions have mainly occurred in the establishment of provision plafonds for intermediation from the banking system.

In the case of the earthquake in April 2009, provision funding totaling €2 billion was made available to credit institutions through Plafond Ricostruzione Abruzzo (Abruzzo Reconstruction Plafond): this measure allowed the provision of subsidized loans for repair, reconstruction or reconstruction purchase of housing.

For the earthquake of May 2012 in Emilia Romagna, Lombardy and Veneto, two plafonds were set up to support the territories and populations involved: Plafond Riconstruzoine Sisma 2012 (Earthquake Reconstruction Plafond 2012), of €6 billion, for the granting of subsidized loans of up to 25 years dedicated to repairing and rebuilding residential and productive properties, and Moratoria Sisma 2012 (Earthquake 2012 Moratorium Plafond), a €6-billion-euro facility for the granting of subsidized loans to businesses, agricultural entrepreneurs, self-employed workers,  and employees for the extension of the tax payments, social security contributions, and compulsory insurance premiums.

On the other hand, Plafond Moratoria Sardegna (Sardinia Moratorium Plafond) is the instrument by which the participating banking institutions granted subsidized financing to the subjects affected by the flood that hit Sardinia in November 2013. Finally, with Plafond Eventi Calamitosi (Calamitosi Events Plafond) €1.5 billion of provisional funding was provided to the Italian banking system for granting subsidized loans to compensate for damages suffered by families and businesses affected by events between 2013 and 2015.

With the Plafond Reconstruction Sisma Centro Italia ( Central Italy Reconstruction Plafond)  supported by today's operation, CDP strengthens its proximity to the territories, populations and businesses affected by natural disasters, as a result of the constant collaboration with national and European institutions. 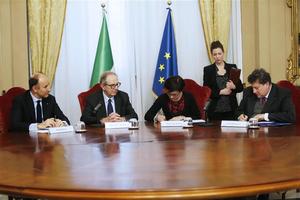