Fincantieri is ready to acquire the shipyards in Saint-Nazaire, one of the main centers of shipbuilding in the world. The company owned by the CDP Group has received the green light from the central district court in Seoul to acquire of 66.7% of STX France, the French arm of the Korean holding company STX Offshore & Shipbuilding, which manages the Loire sites .

Finantieri announced the start of talks, which become an exclusive negotiation between Fincantieri, the Korean STX - struggling with a delicate bankruptcy proceedings - and the French State, which holds a blocking minority for the sale.

The Saint-Nazaire numbers testify to the excellence of these sites, the only profitable activity of the Korean holding Stx. Former factories of l’Atlantique, which in the past built record-breaking ships like the famous Normandie (the largest ocean liner at the time it was launched in 1932), the France (the longest passenger ship never completed until 2004), and the ' Harmony of the Seas (the largest cruise ship ever built), are still a reference point for large cruise companies, which have filled the order books of shipyards with mega-contracts until 2026. Saint-Nazaire is also a crucial defense garrison, the only one in France able to produce the latest generation of aircraft carriers and military ships.

With this acquisition, Fincantieri, representing Italian excellence in shipbuilding with 20 plants in 4 continents, continues growing in foreign markets, reinforcing its role of head operator in the shipbiulding sector. 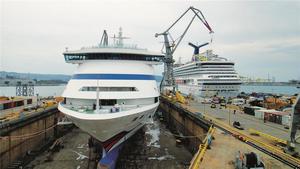