Fincantieri continues to rack up success worldwide. Just in February, the CDP Group-controlled company announced its involvement in a number of operations which demonstrate entrepreneurial expertise and reaffirm the important role the shipbuilding group plays internationally.

The Trieste-based company’s strategy spans beyond the Italian borders, reaffirming its commitment to two distinct routes:  military and civilian.

Fincantieri inked a binding Memoradum of Understanding with China State Shipbuilding Corporation (CSSC) and Carnival Corporation to build two cruise ships with the option of four additional units. The deal, worth 1.5 billion Austiran dollars, aims to give new impetus to the development and growth of the Chinese cruise industry. The parties signed the accord on behalf of the joint venture between Fincantieri and CSSC Cruise Technology Development Co., Ltd (CCTD), of the joint venture between Carnival Corporation and CSSC, and the shipyard Shanghai Waigaoqiao Shipbuilding Co., Ltd (SWS).

In Abu Dhabi, during the IDEX-Navdex international defense and security trade show, Fincantieri announced the signing of an agreement  with Ferretti Group, a motor yachts maker. The collaboration between the two Italian companies aims to develop industrial and commercial synergies in their respective sectors. The MoU also covers yacht building and will open new national and international scenarios in civilian and military areas.

In Australia Fincantieri says it is ready to work put its technological capabilities to work for the Australian military in the context of the company’s participation Future Frigates - SEA 5000 program. Fincantieri has been shortlisted to deliver 9 next-generation frigates for the Royal Australian Navy (Ran), a contract worth about 35 billion Australian dollars. Future Frigates is one of the most important programs in the world in the field of military surface ships.

The other military order concerns the construction of the first multipurpose offshore patrol vessel and falls within the program of Italian Navy’s operating line renewal  decided by the Italian Government and Parliament. This vessel, the first of seven units, will be delivered in 2021 and it is now under construction in the Muggiano shipyard in La Spezia.

These operations are further demonstrates of Fincantieri’s skills in dealing with the global market, and CDP Group's ability to promote the Italian industry: #wepromotethefuture. 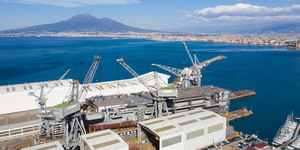