2020 results. A year of extraordinary commitment to support the country and enterprises

During 2020, Cassa Depositi e Prestiti put in place numerous initiatives to support the Italian economy. Thanks to a growing commitment, some €39 billion (+11% compared to 2019) was deployed during the difficult pandemic emergency, supporting over 100,000 enterprises and 50 infrastructure projects worth €4 billion, thanks to the new advisory service for local authorities.

These results were made possible through the work of CDP's people and the growth in postal savings, which reached €275 billion. Not only that, in the extraordinary period that was 2020, Cassa Depositi e Prestiti launched new issues on the financial markets, enabling the Group to consolidate its leadership in Italy in sustainable finance, with €2.5 billion of issues inspired by ESG criteria.

Operating indicators are up, with profits reaching €2.8 billion, reflecting the effectiveness of the new business model and management efficiency.

The CDP Group's first Integrated Report was also approved, highlighting the new role of sustainability. That is why CDP has:

These are significant numbers that involved solutions to support innovation and the growth of enterprises, including international ones. They also included projects for local areas, those to promote the energy transition, urban regeneration and the development of social housing, and initiatives to establish European champions in strategic sectors of the national economy.

It has been a complex year, during which the Cassa Depositi e Prestiti Group’s extraordinary response has seen it continue on its ever-constant path to stand by the country in support of the innovation and competitiveness of enterprises, infrastructures and regions, thereby achieving the goals set out in the Business Plan and laying the foundations for Italy’s relaunch.

The Chairman of Cassa Depositi e Prestiti, Giovanni Gorno Tempini, said "In a year marked by significant difficulties, we have achieved significant results that have seen the Cassa Depositi e Prestiti Group strengthen its commitment to innovation and the competitiveness of enterprises, infrastructures and regions, and promote the emergence of European champions in strategic sectors of the national economy, achieving the goals set out in the Business Plan."

The CEO of Cassa Depositi e Prestiti, Fabrizio Palermo, highlighted how the CDP’s strong commitment has resulted in numerous initiatives to support the Italian economy. "The Group deployed €39 billion during the difficult pandemic emergency, supporting over 100,000 enterprises and 50 infrastructure projects, thanks to the new advisory service for local authorities. These results were made possible by the growth in postal savings, which reached €275 billion, and by new issues on the financial markets, where Italy's leadership in sustainable finance was consolidated, with issues for €2.5 billion inspired by ESG criteria". 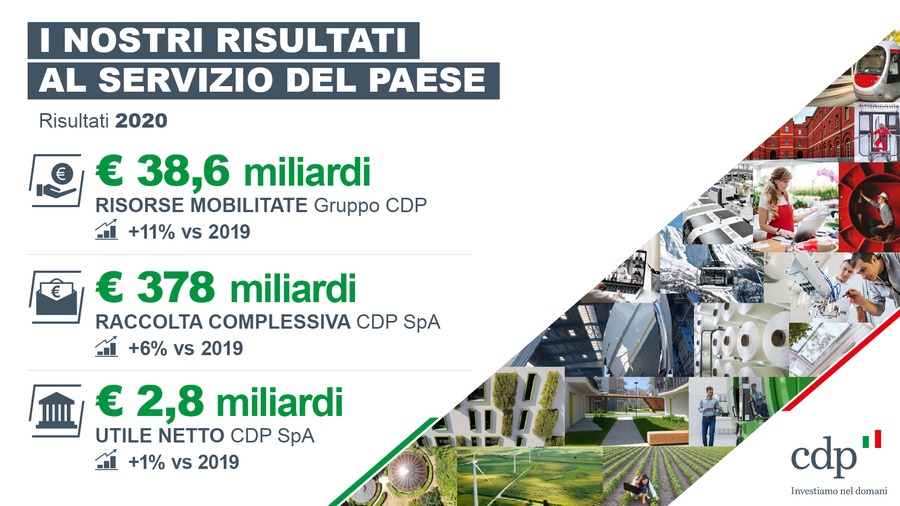 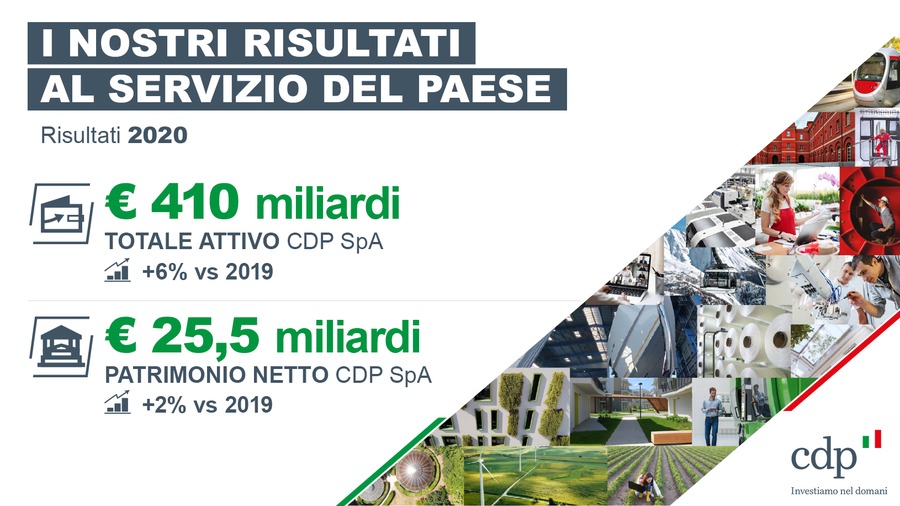